Last months, I worked on my site to make it multilingual. It’s not so simple and the ready-made extensions are not enough to get the desired good running. I had to write a lot of lines of code, and particularly to translate all the important texts of the site.

Since a few days it works well. And an English version is accessible on almost all the content.
Therefore, the menus, the pages and the links of the site, adapt themselves to the language chosen by the visitor. Some events will be translated as well.In the English version, the list of events will indicate with a flag if the post is only in French or if it is translated into the visitor’s language.

The articles will remain in French. Their writing is already important, if I had to add translation time, I would not be able to publish anything for lack of time.

I chose a Union Jack icon for the English part, I apologize to my American friends or non-British English speakers.

I had to choose something, and I selected the closest flag to my home, which remains understandable by all.
Don’t hesitate to tell me about that. 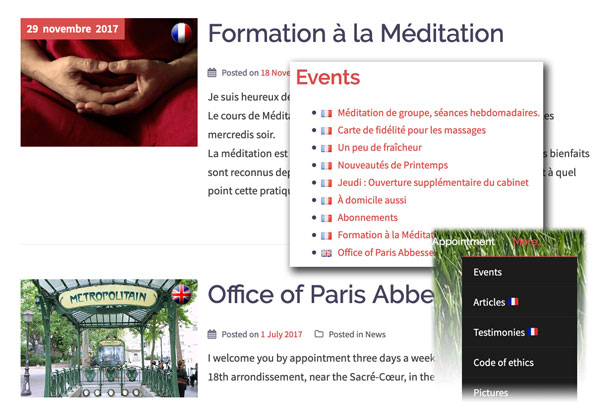 English speakers will probably smile at the awkwardness of my translations, because I did them by myself and I’m sure I left a lot of mistakes. The best would have to be assisted by a truly bilingual person, or speaking English natively in first language. Even so, I hope they will appreciate my effort to put the site within reach.
I planned my development for several languages, so I think I will translate the site in Spanish soon. An other language that I speak, doing surely as many errors, and this will certainly provide some jokes. But a laugh or a smile remain a beautiful gift.